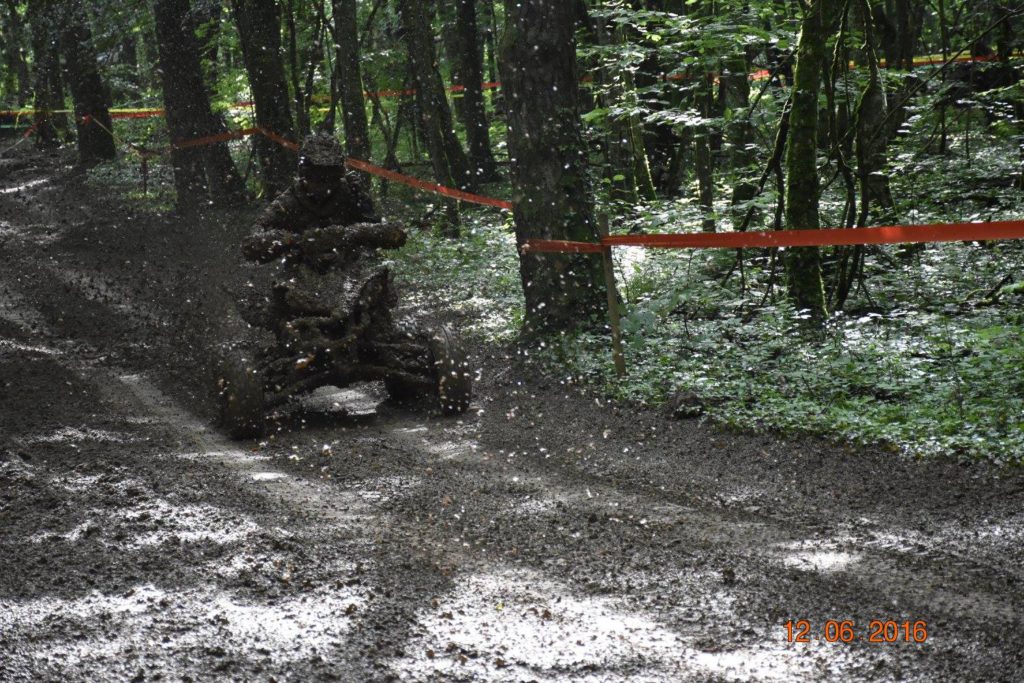 Last weekend, the most important race of the year took place: 12h Mondial du Quad. A race which every quad rider wants to race. A race we would like to race. Ever since the moment we can remember, we went there in the summer for my father, because he was a rider. For example, he … Meer lezenThe race of the year!

This weekend, we competed in the European Quad Trophy Bastogne (EQTB) in Belgium. It was a race of seven hours divided in three heats. Last year, the weather was horrible and that is actually an understatement. This year, the weather forecast was good: sunny, not too hot. Excellent to beat some ass. It turned out quite different. It was like they were suffering from bipolar disorder ‘up there’. None of that kept us from riding though :-).

34 teams registered to race this weekend for the EQTB. It was the first time for us in this race. In the years before, we’ve competed in the Nuts Cup. That is a three hours race and more or less the little brother of the EQTB. Therefore, we were very excited (and nervous of course)  to race with ‘the big boys’ this time.

We arrived thursday evening at the Sans Souci circuit in Bastogne. We always like to be early if that is possible and do some shoppi…uhh.. have a good spot in the pitlane. Saturday morning, we’ve passed the technical control and in the afternoon the free/time practice started after a ‘tour en ville’. Savannah had the transponder attached to her quad by the technical crew at the control. After the practise, it was gone. We didn’t know when that had happened, but she did qualified 25th.

At 09.00 pm, the first heat started. Our game plan was that Savannah would take care of the start, because her quad has an electric starter. For the laymen: that is quite important, because it is a Le Mans start (running to the quad). She tries to run her quad a bit more, when she is already set up at the start and BAM bad luck strikes again… It just would not run. Quick change of plans: Kimberly will take her place. She never did a Le Mans start before, because she has a kickstarter (takes a longer time to start the engine). But there’s a first for everything. She can tell you, it is quite nerve-racking if you’ve never done that before and if you are not prepared. Savannah came to her when she was set up and said: ‘Just relax, it doesn’t matter’. That took of the pressure and it actually went quite well. After one round, she was at the 25th position. The track got heavier during the heat and it became dark. After three hours, they finished in a 25th place.

After a short night of sleep, we needed to set up at the track for starting a second heat of two hours at 08.30 am. Kimberly had to do the start again, because she finished the first heat and her quad was in the ‘parc fermé’. This time it went less well. Quad didn’t feel like running and she left her place last. At that point, you need to stay calm, because it just does not help if you crash the first lap because you feel like you need to make up. However, she did what she could do. The sun was burning, because of the dust you felt like a blind person and after 30 minutes Savannah took over. They changed again after 30 minutes and Savannah finished at a 21th position.

Last heat! Savannah got her quad from the closed parc and took a great start, while the first rain drops where starting to fall. But the old wisdom says: ‘Some people walk in the rain, others just get wet’. I actually think it’s a weird saying, but I can feel that that’s about Savannah. The girl probably was a fish in her previous life. No wonder she came through fifteenth after one round and even tenth after several rounds. Her goggles did not cooperate though, so had to go through the pitlane to get a new one. In the whole heat, the goggles of every team in the race steamed up and got covered with too many mud.

Jim Bos and Dylan van der Stelt of team VLS finished seventeenth. Overall, we finished nineteenth and as second women team. It was a great experience and we can look back at a good race, despite some setbacks. We are getting better every race and we keep training to keep this up. We have learned a lot this weekend. (Kinda missed the pom pom girls though :’) (you know what we mean, if you’ve been there)).

A huge thanks to our supportive sponsors. The Goldspeed tires provided us with amazing grip during all weather circumstances. Kramp financially sponsored this race. We are very grateful for that! Looking forward to the next race!

For the dutchies, there are some media articles!

Last Friday, a motocross jubilee race was organised in Nieuw Vennep. Even after 25 years, it is still a beautiful event and the number of participants was more than 600.

Savannah had to enter the race later, because she had to make a couple of tests that morning at school. She missed the free practice. However, she made it just in time for the time practice. Unfortunately, she could not make in the fast group A, because she did not practice on the track. The organisation would not give her a wildcard for group A. Because of school, Kimberly couldn’t make it in time for the time practice, so she couldn’t participate at all :-(.

Savannah came into the B-finals with 16 other competitors. In the first heat, she was satisfied with a second place after she was hold back by slower participants. In the second heat, she got away from a sensational collision right after the start. She took the lead and the difference between her and the second one became bigger and bigger after every lap. She ended the race with a big advantage of more than 10 seconds. She was the overall winner. Although this victory did not have much value to her, because she preferred the A-group.

For the Dutchies: there are also some newspaper articles!

Last weekend, we have been riding our first endurance of the year 2015 in Goncourt (France). We had never been in Goncourt before. Although, the track was great and the race itself was amazing. A part of it was through the woods, which makes the race, especially at night, very special.

The race started with four hours on saturday from 8pm until 12pm. We were a bit nervous, because it was our first time that we were going to race in the dark. However, we did not face any problems, especially when our eyes got used to the dark surroundings. On Sunday, the race started at 10.30 am for six hours. Savannah ended the race on saturday evening, so she had to start again on Sunday. A great part of that race was that the organisation had changed the track in comparison with the track on Saturday. The track was more difficult on Sunday, the sun was burning and the skin on our hands was full of blisters.. Most of the 51 competing teams were with three persons, so they were in advance.

At 4.30 pm, we had finished in a total 23th place and as second women team. Jim Bos and Dylan van der Stelt, also part of team VLS, finished in a 21th place. The race was a great preparation for more important races this year and an awesome experience. We want to thank everyone who was there to support us and our sponsors, especially Goldspeed for the tires and rims. On to the next one!

For Dutchies: read also the newspaper articles on our experience in Goncourt!

Thanks to Angela Huisman, Valerie Genin and DV Racing Pics for the pictures!

We’ve had a great practice yesterday in Geldermalsen with our teammates from team VLS. Savannah is back from Canada and thrilled to ride again! Thanks Angela Huisman for the pictures.